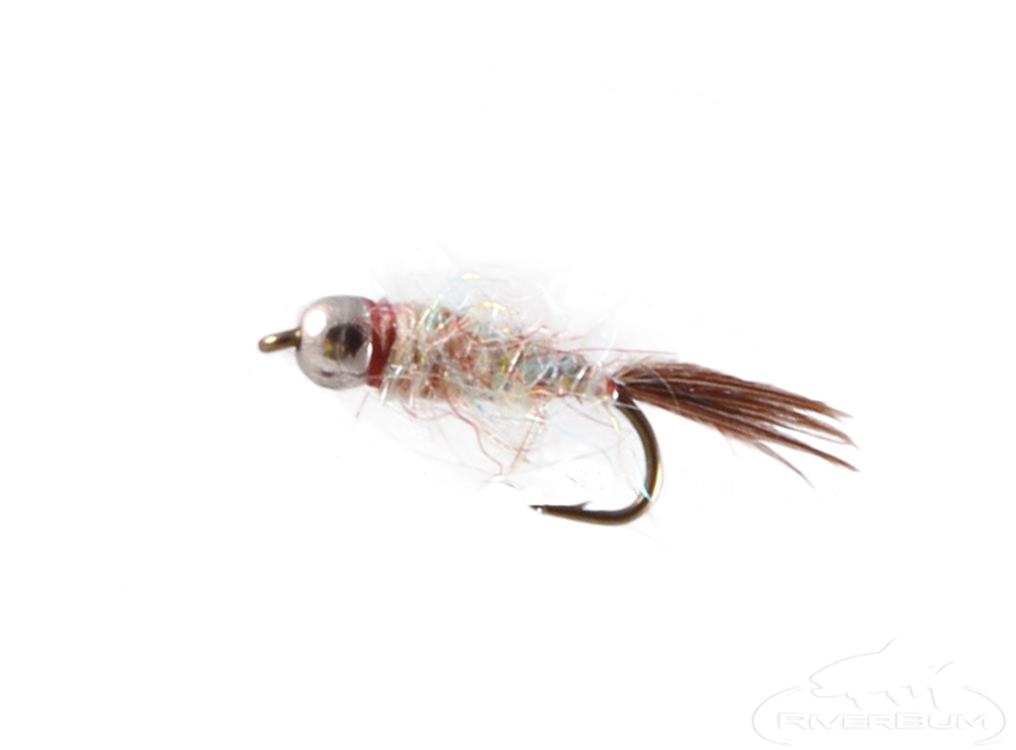 The Surveyor Nymph is a RiverBum custom pattern designed by one of the best competitive anglers in the world and fished heavily in international competitions. We have found this to be one of our most successful attractor nymphs. The Surveyor's rainbow dubbing is specially designed with a blend of different colors to capture different shades of light and stand out in any fishing condition. This pattern works as a sow bug imitator and the extra weight of the tungsten bead makes this fly sink quickly. This once local favorite is now Surveying the world and taking many fish in the process. 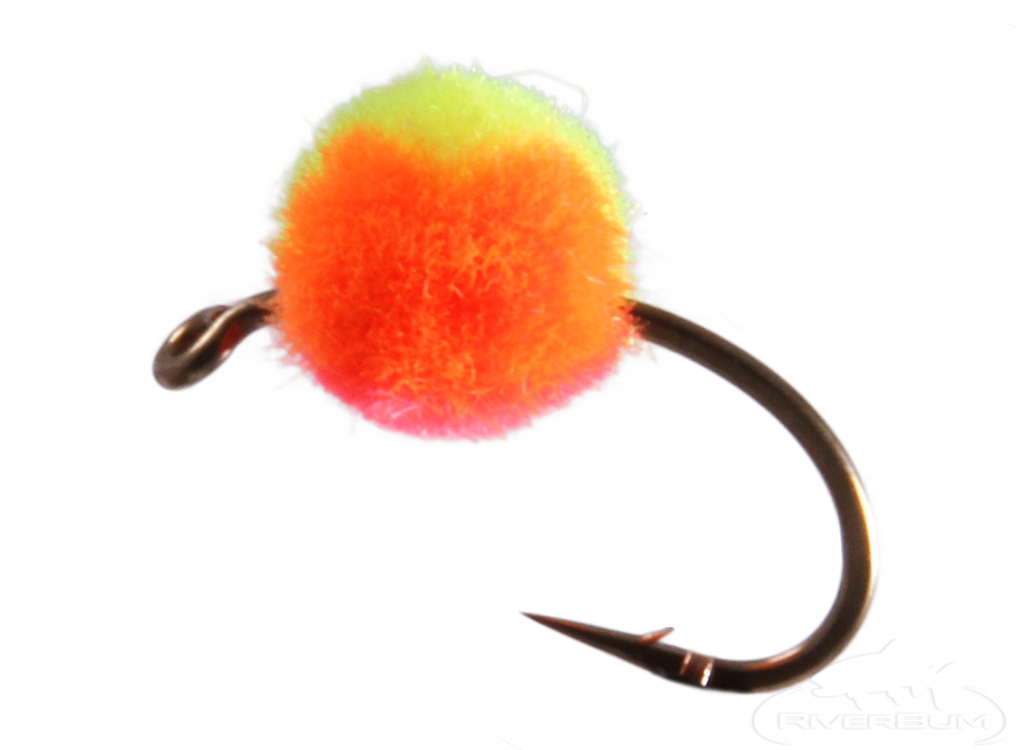 The Clown Egg Fly is a great roe pattern for waters that have spawning fish. This newer color has quickly become one of the most effective all around egg patterns. There is no condition where at least one of the colors will not stand out and this will help increase your catch rate. Whether you are fishing a famous Steelhead run, your local river or even the gravel point on the nearby lake, the fish have learned that these glowing orbs are a tasty meal. Fish that are not spawning will hold in areas near the spawning fish and sometimes even travel with migrating fish for the opportunity to eat their misplaced eggs. 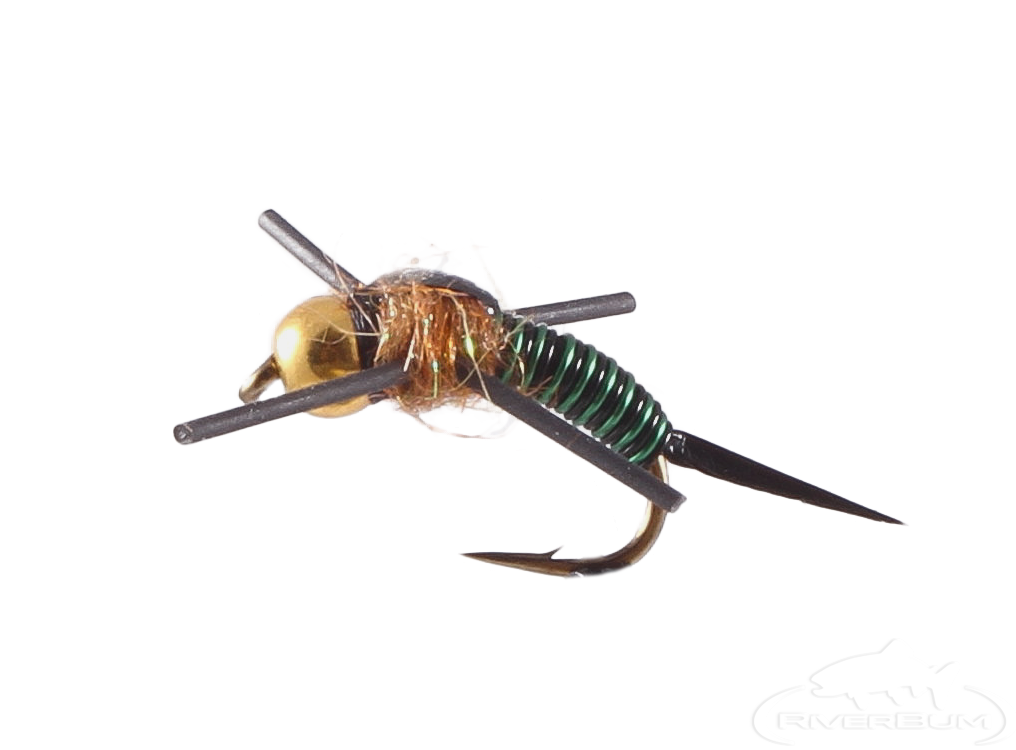 The Green Wired Rubber Legs Copper John adds a realistically segmented abdomen to an already effective pattern. This fly sinks quickly and can be used as a deep nymph or a dropper. Fish seem unable to resist the combination of color, flash, and realistic shape. The addition of rubber legs and realistically curved body creates an added attractant that makes this fly irresistable to hungry trout. Several sizes, colors, and variations of this pattern in the fly box will greatly add to success on the water.

If you want to catch fishthen you better have a pile of Catch's Copper K, Chartreuse TB with you. Catch's Copper K series take the traditional Copper John to a whole other level. Realistic, life-like....this fly simply catches fish. This baby is a smooth as a 24 year old scotch. This nymph rig means catching huge fish. We all know the big boys live down deep, where our beadheads in custom colors are going to find them and hook up. 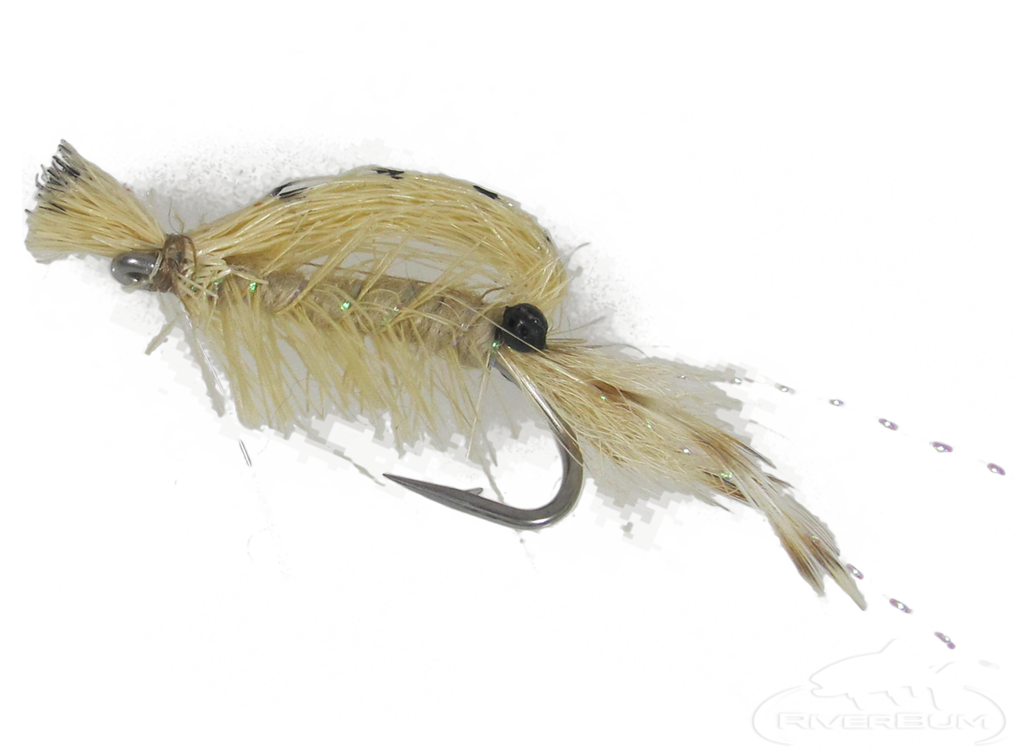 You can't fish for bonefish or permit without thinking about crabs and shrimp. Both of these fish work the flats eating crustaceans as they move along. Successful anglers start with the right size and color fly. The fly also has to hit the water with a minimum of commotion but still sink quickly. This fly is a must have for any serious salt fisherman. 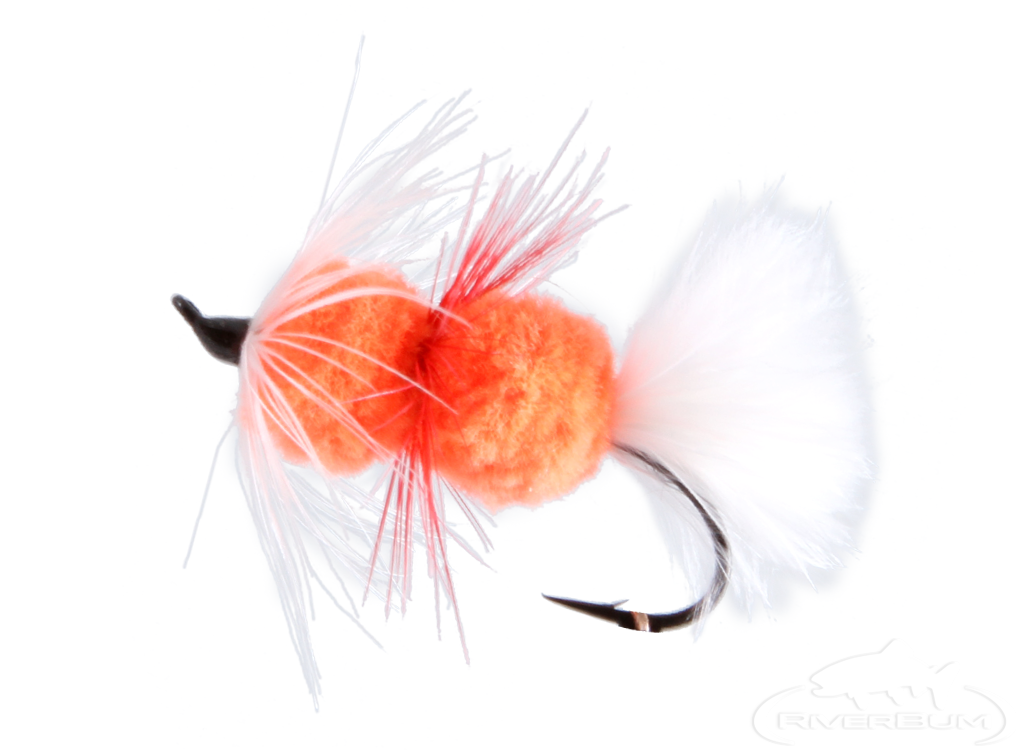 The Babine Special Fly is a classic two egg pattern that was developed around the famous Babine River system, home of the world's largest steelhead. It is an effective fly for steelhead and several Pacific salmon species. 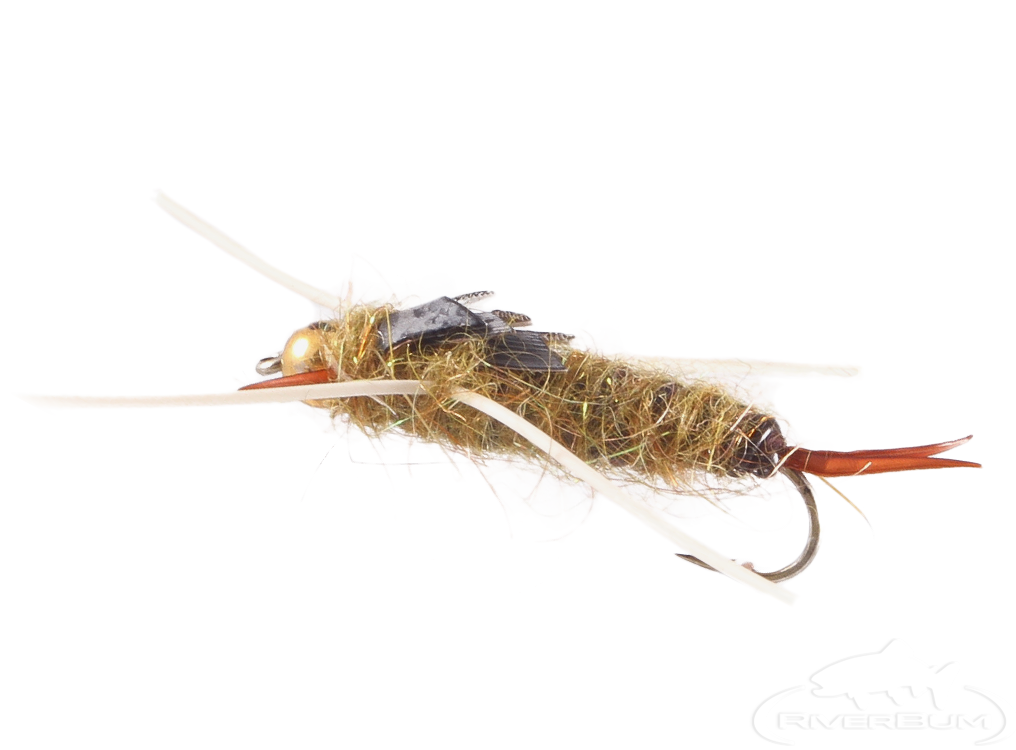 The Golden Bead Head Rubber Leg Stonefly Nymph has the best features of other patterns all in one effective fly. The realistic profile makes big fish inhale this pattern as if it were candy. This lifelike pattern is productive for nearly any fish and will work even in waters without stoneflies. 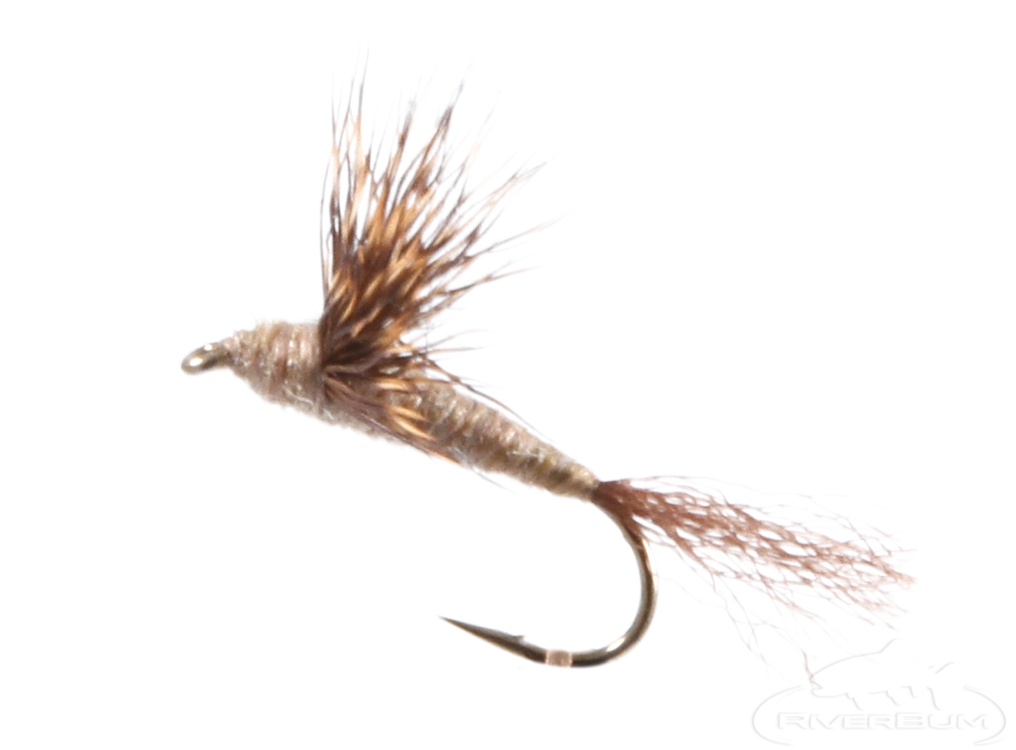 The Callibaetis Sparkle Dun covers the stage of a mayfly hatch just before complete emergence of the dun. At this vulnerable stage mayflies are irresistable to cruising trout. Every angler should carry these flies in appropriate sizes and colors for fishing the beginning stages of mayfly hatches on their local waters. 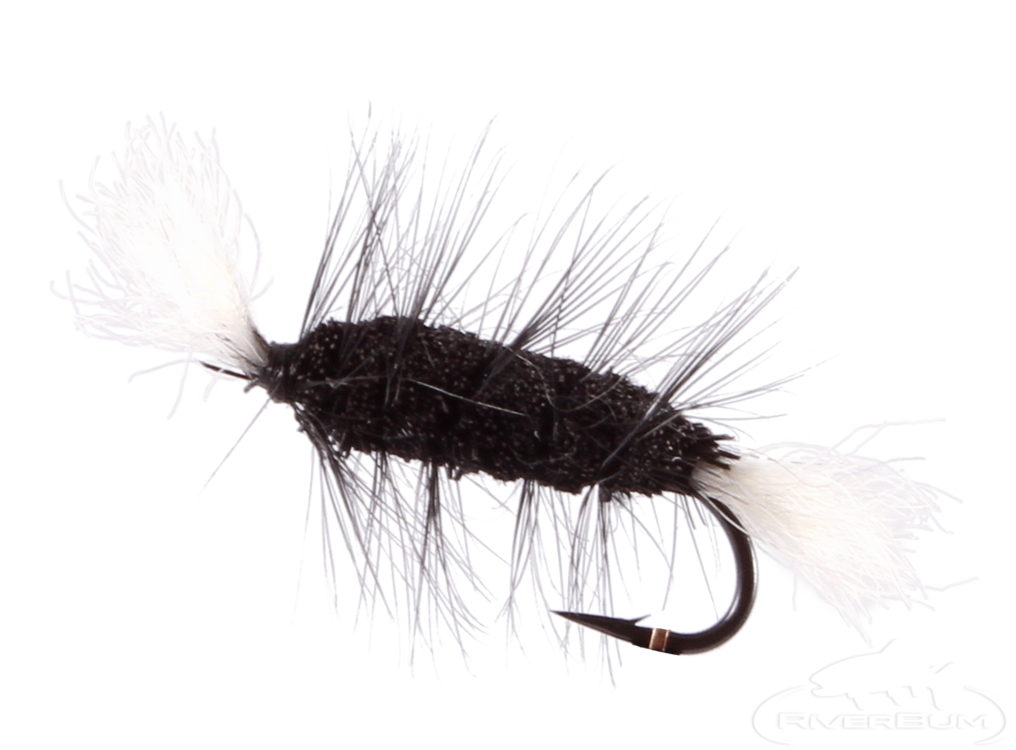 The classic Black Bomber Fly has proven itself to be one of the very best waking or skating dry flies. It is a must have wherever silvers and steelhead are known to chase flies on the surface.

The Wooly Bugger is perhaps the most versatile fly in fly fishing. The Bead Head Brown can imitate or at least suggest any number of trout foods. Every angler should dedicate one or multiple fly boxes to the several colors and variations of this fly. The unweighted version is especially useful in stillwater situations where sinking lines are used and the bead head varieties can be used where a weighted fly is called for. 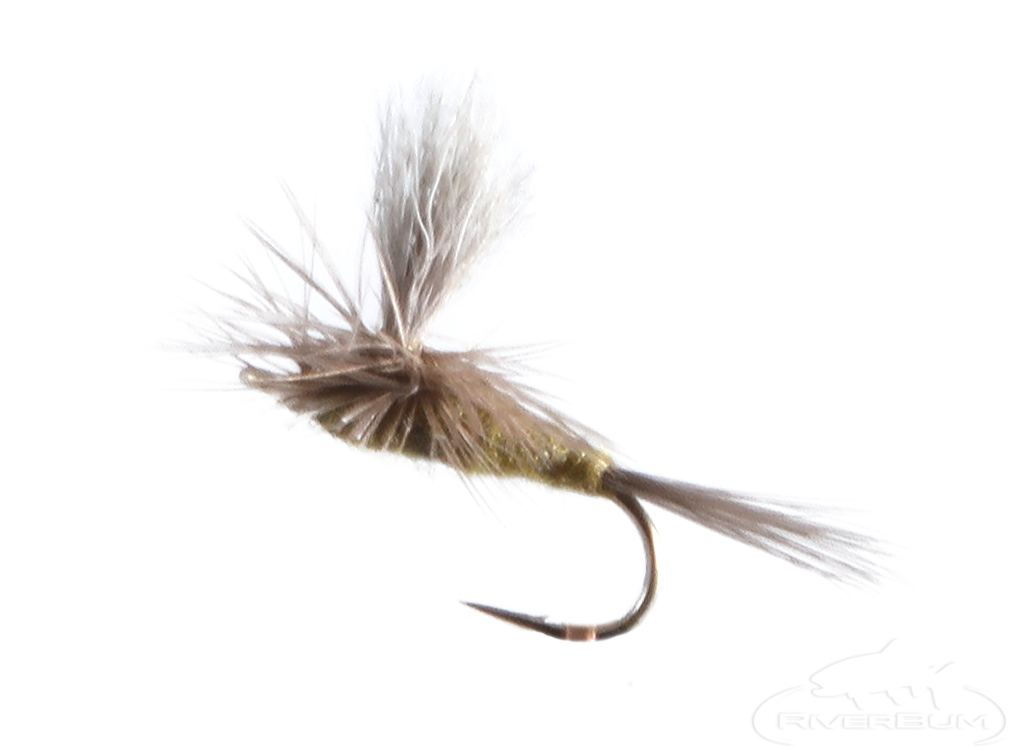 Parachute flies are very popular in fly fishing due to their combination of visibility and fishability. The Parachute Blue Winged Olive Dun Post closely resembles a hatching Blue Winged Olive, floats well, lands right side up, and is easy see. The dun post on this version gives a more realistic color to help fool selective fish. 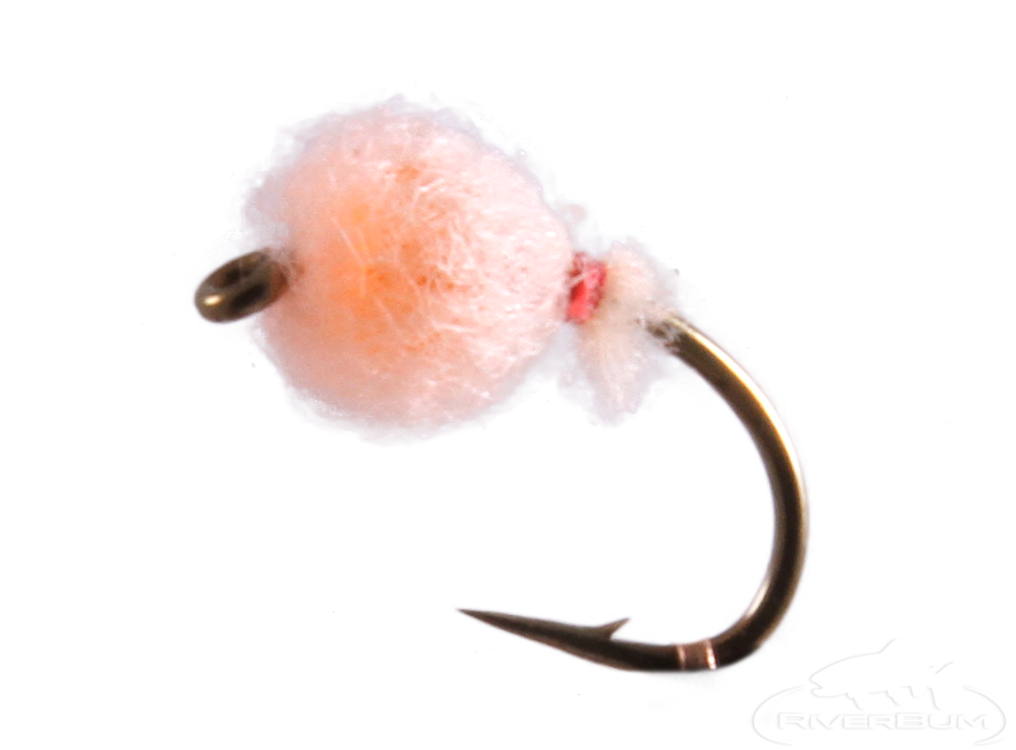 The Peachy King Unreal Egg Fly is one of the most realistic roe patters available. The internal glass bead gives the fly a 3D effect and mimics a fertilized egg exceptionally well. The color combination of this fly is great for catching fish in clear water and works for almost any fish willing to eat an egg. 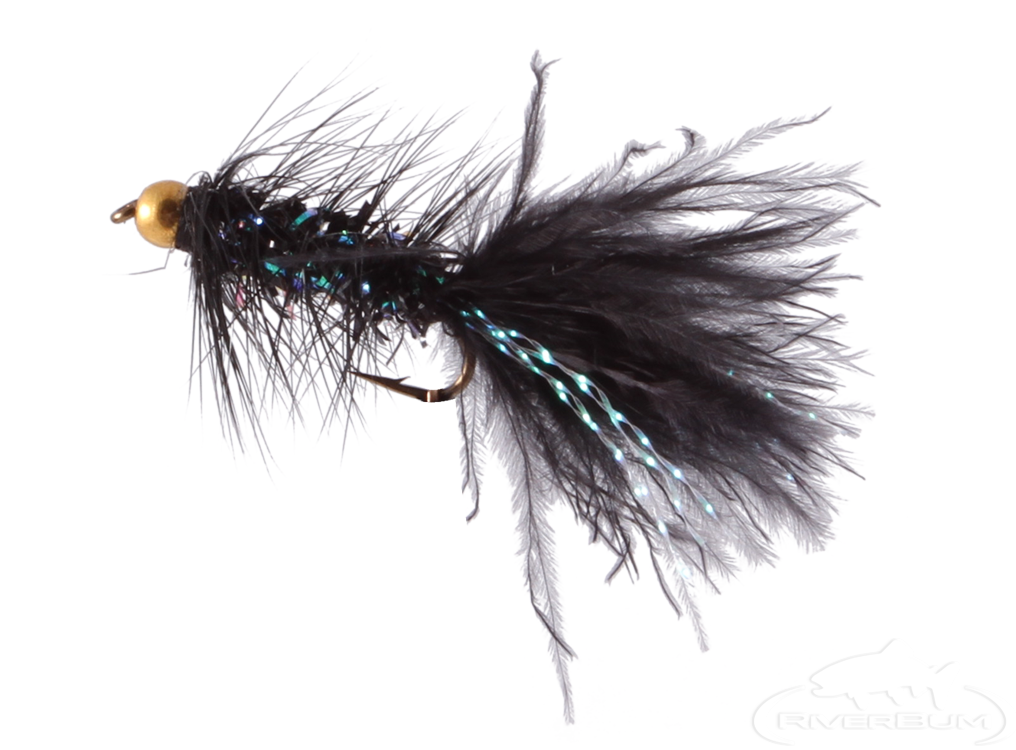 The addition of a bead head, black and pearl krystal chenile and flash to the popular Wooly Bugger makes this Krystal Flash Bugger, Bead Head, Black-Pearl fly come alive. No matter how you fish a Bugger, it is one of the most effective patterns there ever will be. Due to the versatility and its ability to catch any fish that swims the Krystal Bugger is a must have fly pattern. 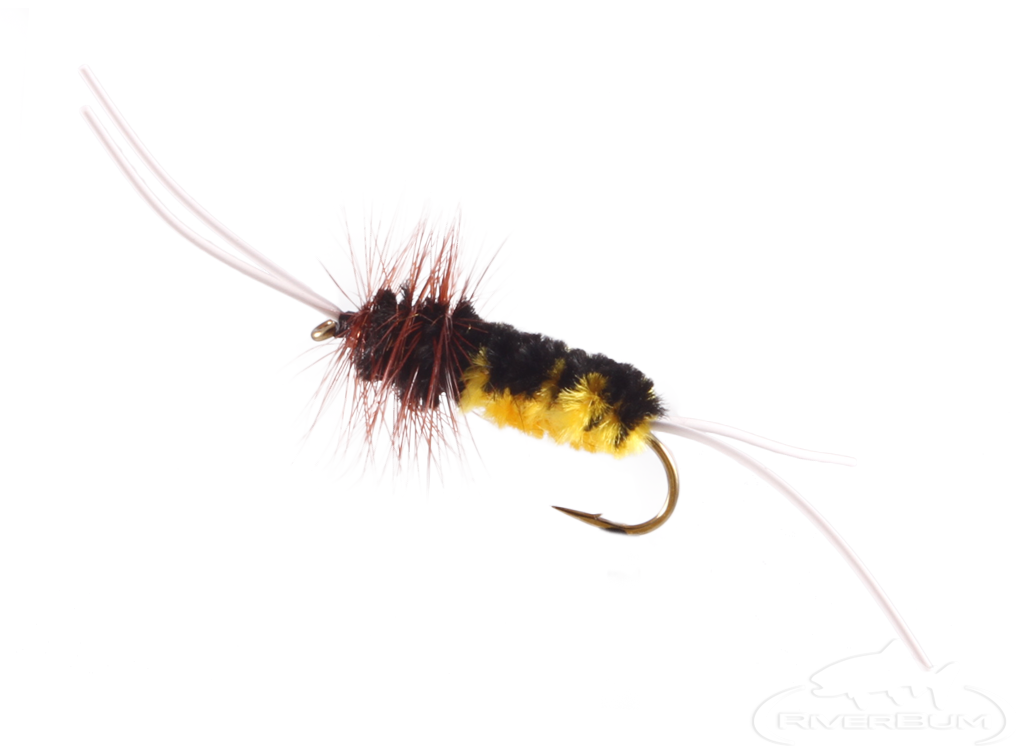 The Yellow Bitch Creek Nymph Fly has been a big fish catcher for years. The bright color and the overall buggy feel make this fly trout candy during the spring and early summer months. The bright color set against black also makes this an effective pattern when your favorite trout stream is a bit high and murky. 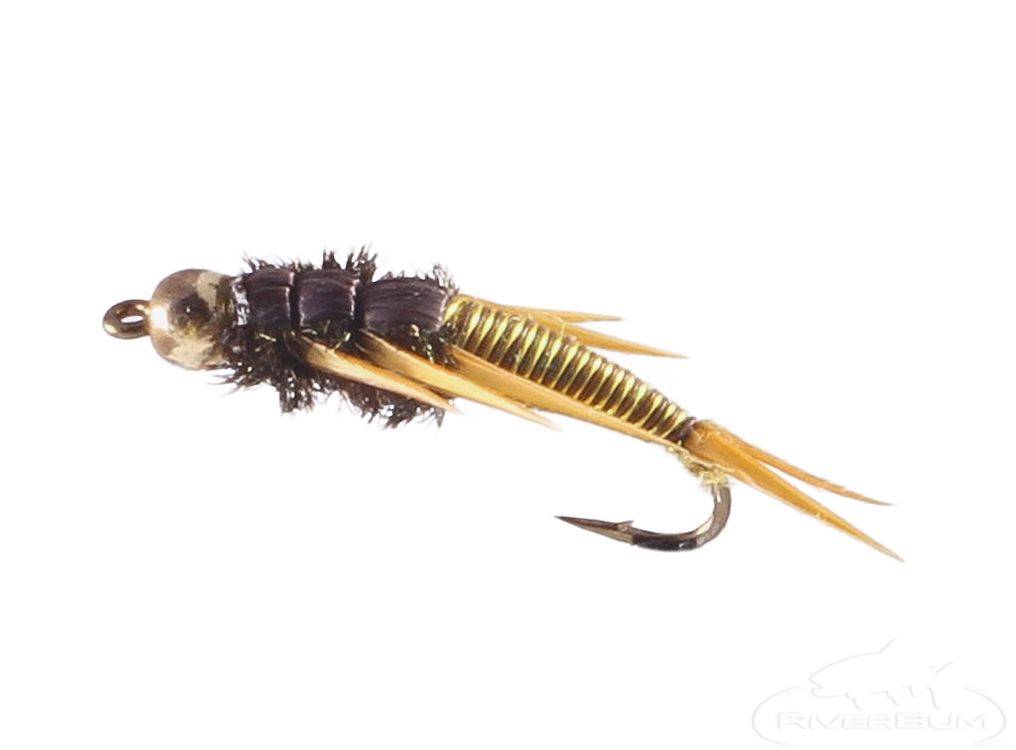 The Golden Wired Stonefly is certainly one of the most lifelike and effective stoneflies available. The two color segmentation and durablility of the wire body make this a favorite among stonefly nymphs. The fact that big fish find this pattern irresistable only adds to its appeal. Every fly fisher should have a few of these ready to go when its stonefly time. 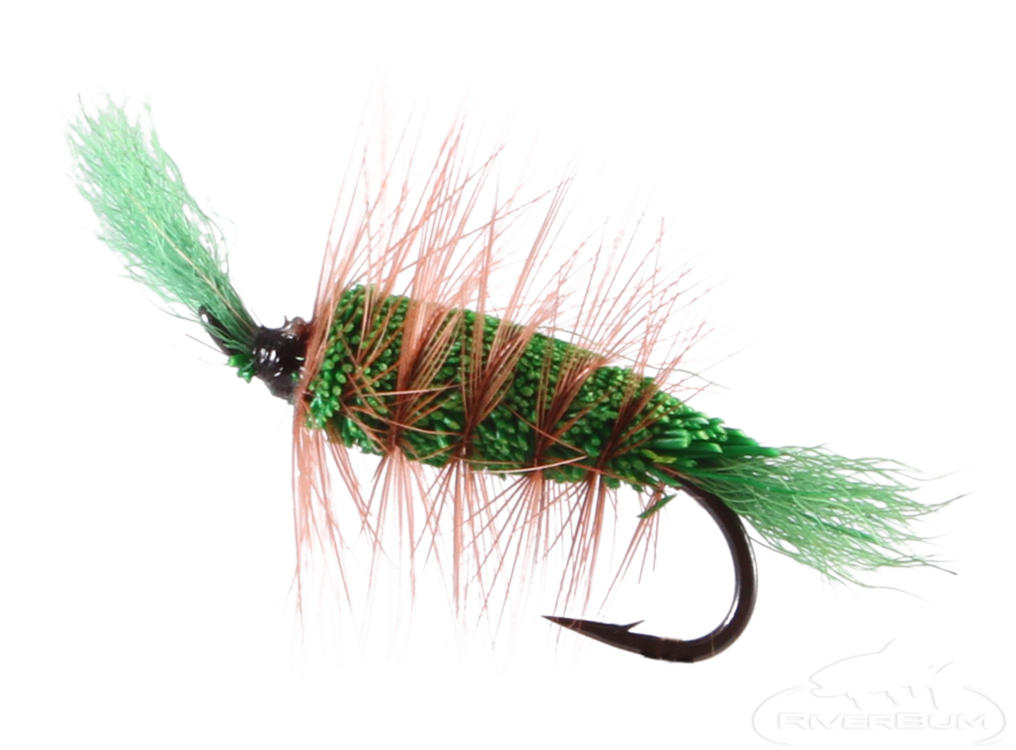 The classic Green Bomber Fly has proven itself to be one of the very best waking or skating dry flies. It is a must have wherever silvers and steelhead are known to chase flies on the surface. 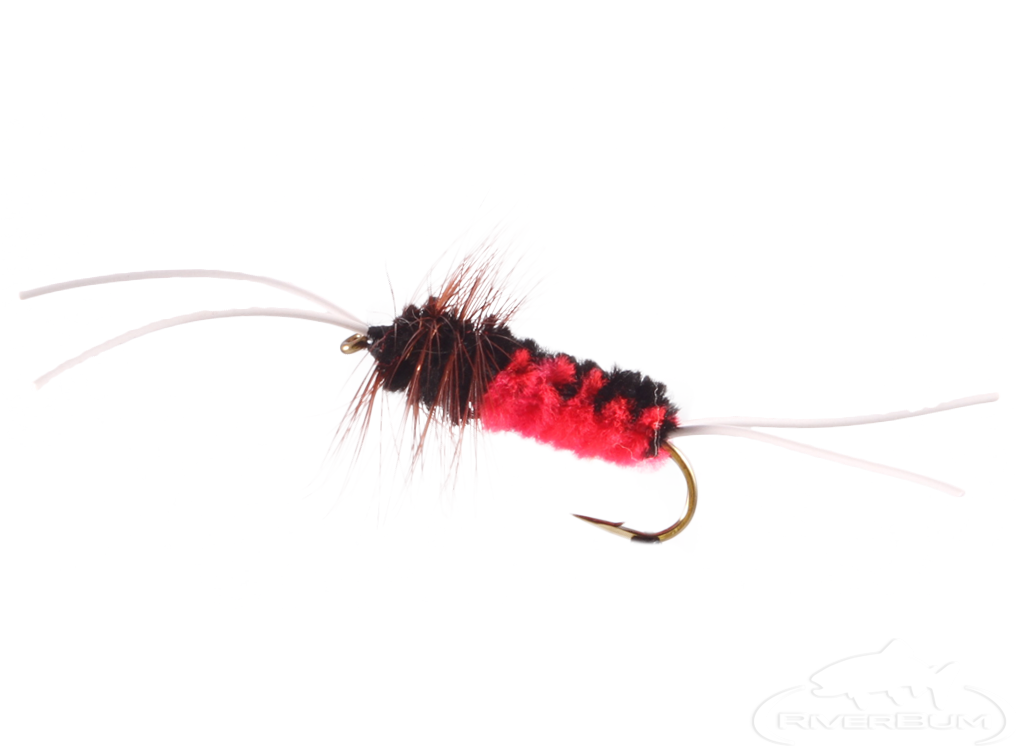 The Blue Charm Fly has proven itself to be an effective pattern for a variety of sea run fish. This fly includes some flash and bright color to enhance its fish appeal. 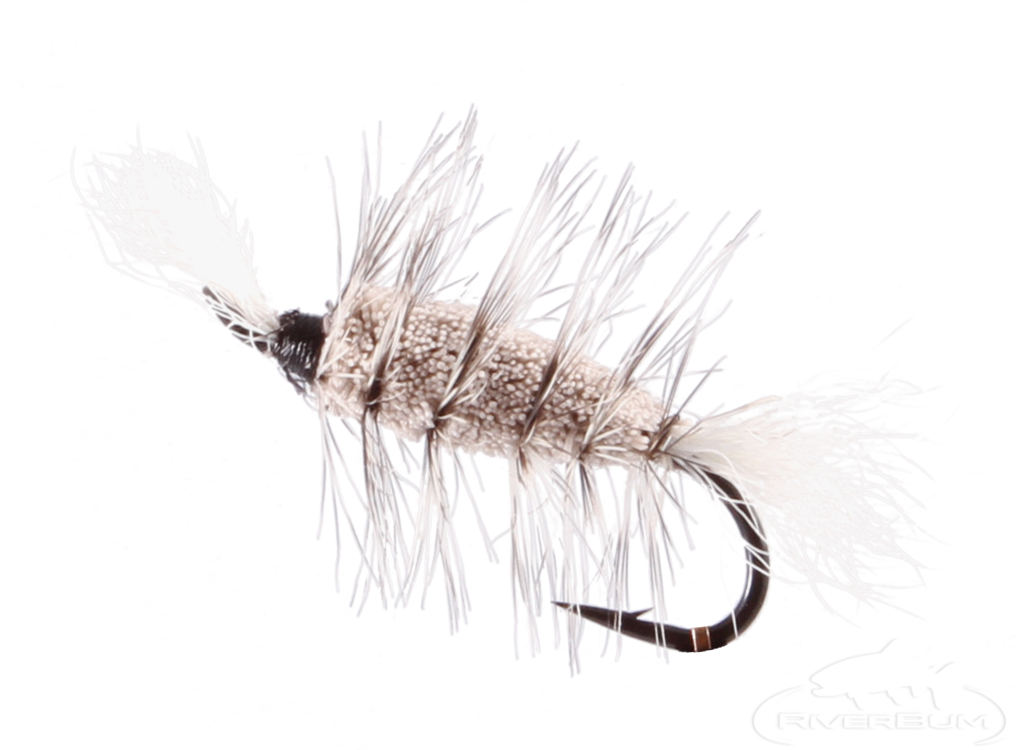 The classic Natural Bomber Fly has proven itself to be one of the very best waking or skating dry flies. It is a must have wherever silvers and steelhead are known to chase flies on the surface. 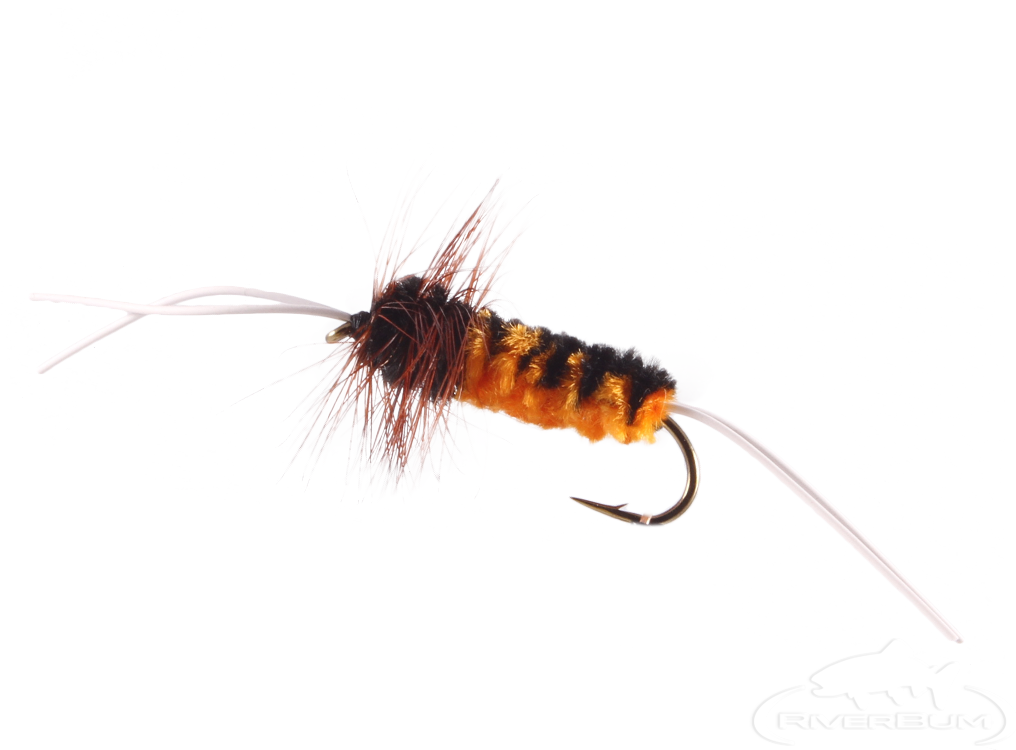 The Bitch Creek Nymph Fly has been a big fish catcher for years. The contrasting colors and the motion of the rubber legs give this fly attracting qualities fish can't pass up. These features make this one of the better patterns for catching fish in high or off colored water. Bitch Creek Nymphs will work almost anywhere but are most effective in waters with stoneflies or crayfish. 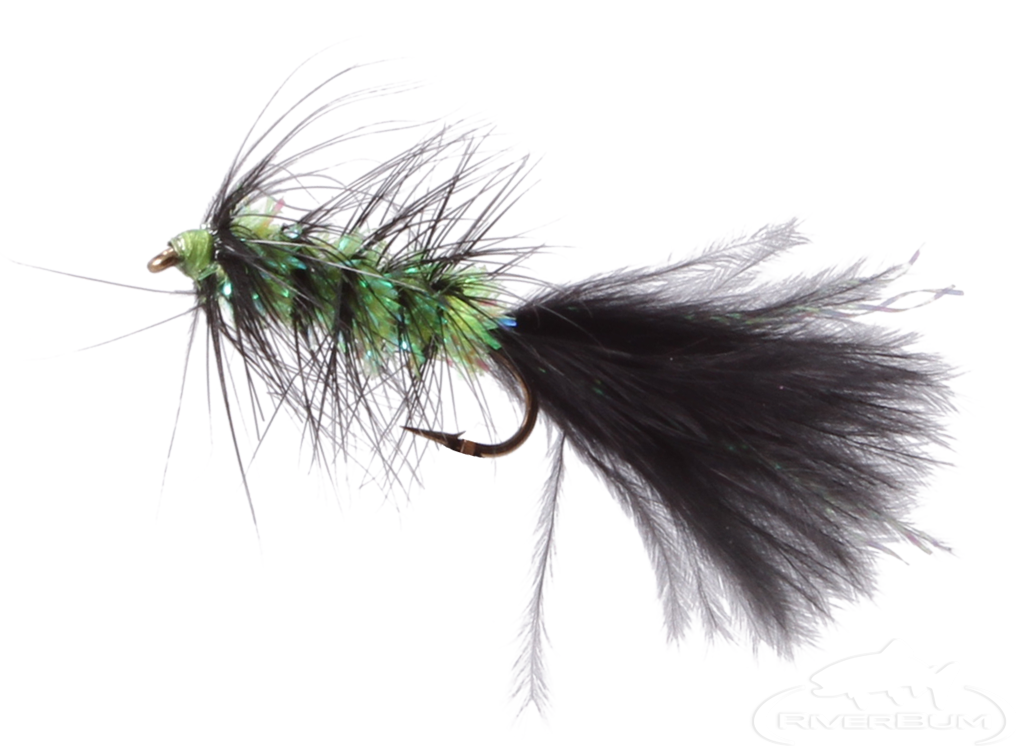 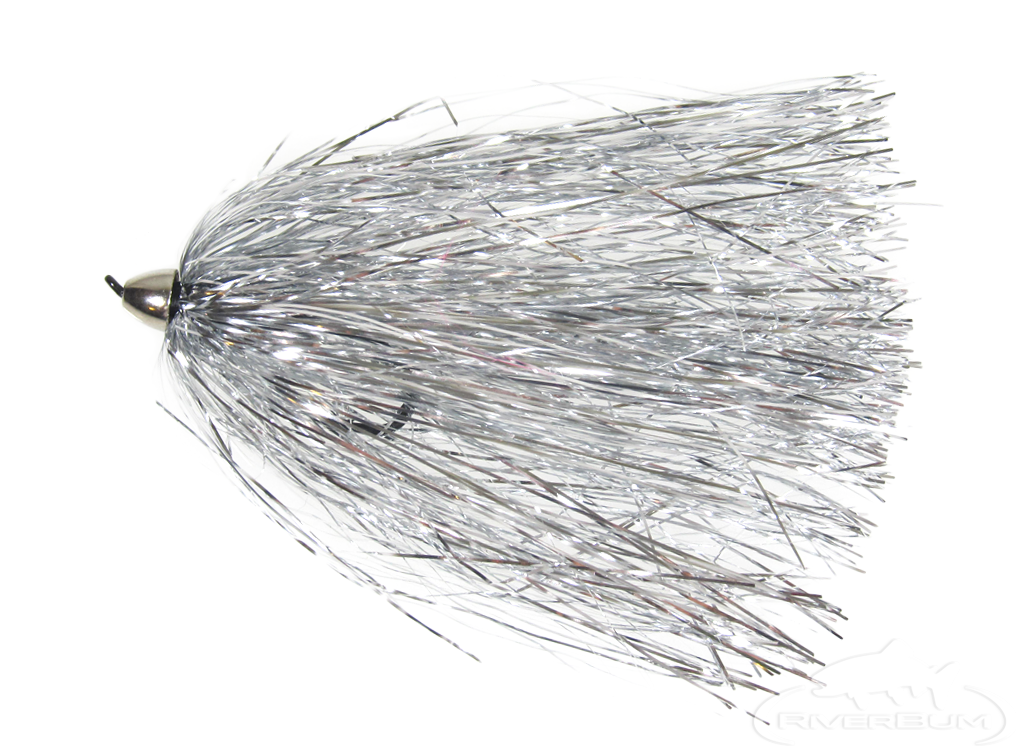 Named after the owner of the Andersen Island Lodge outside of Cordova, Alaska, Boris' Bitch'n Coho Fly is a study in the beauty of simplicity. Extra limp silver or gold Flashabou creates an undulating target that will draw aggressive silver salmon from the waters of Alaska's glacial and tidal rivers and streams. Fished with a floating or intermediate sinking line with an irregular retrieve on the swing, this fly will get a hit on almost every cast! Place it on the edge of schooling silvers and you'll watch them literally knocking heads trying to grab it all day long! 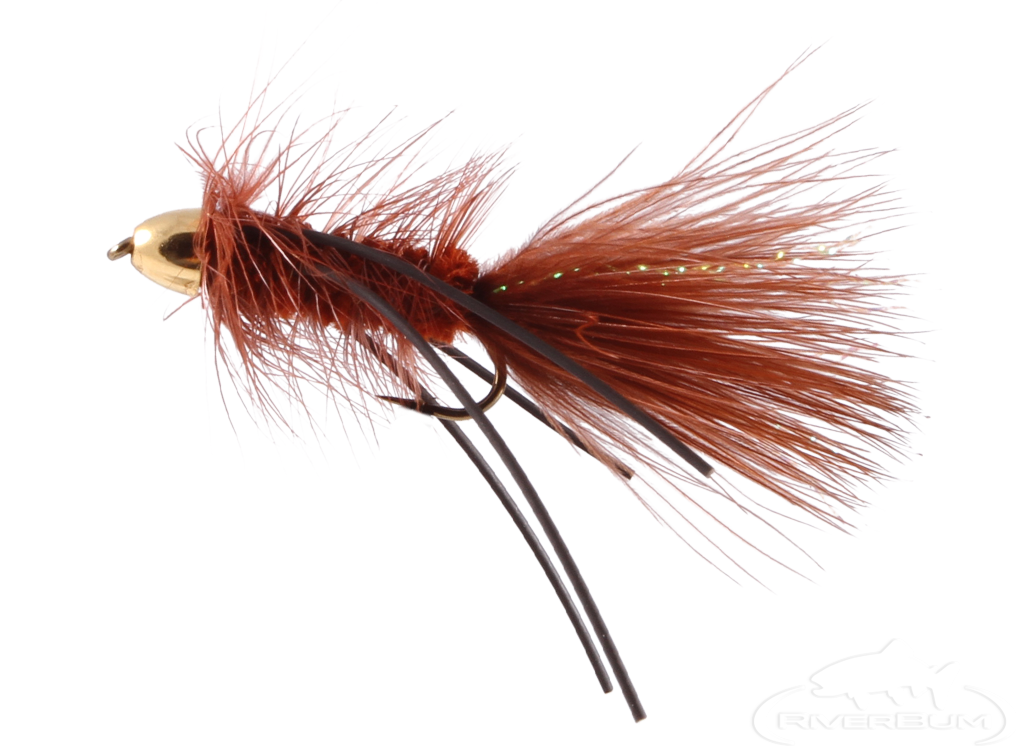 The Wooly Bugger is perhaps the most versatile fly in fly fishing. The Wooly Bugger, Cone Head, Rubber Legs, Brown can imitate or at least suggest any number of trout foods. Every angler should dedicate one or multiple fly boxes to the several colors and variations of this fly. This cone head version has extra weight to keep it deep and rubber legs to give it a little extra life for more strikes.

The Alevin Fly can be key to your early season success. With the coming of spring and early summer and any real significant aquatic emergence activity still weeks if not months away the Alevin is a hot target for fish. A good imitation of a newly hatched steelhead, salmon smolt or even newly hatched trout species of your home waters the Alevin Fly or Sac Fly as it's commonly known should be part of your fly selection. This is a high protein food source that fish look for with eager anticipation with each spring season. 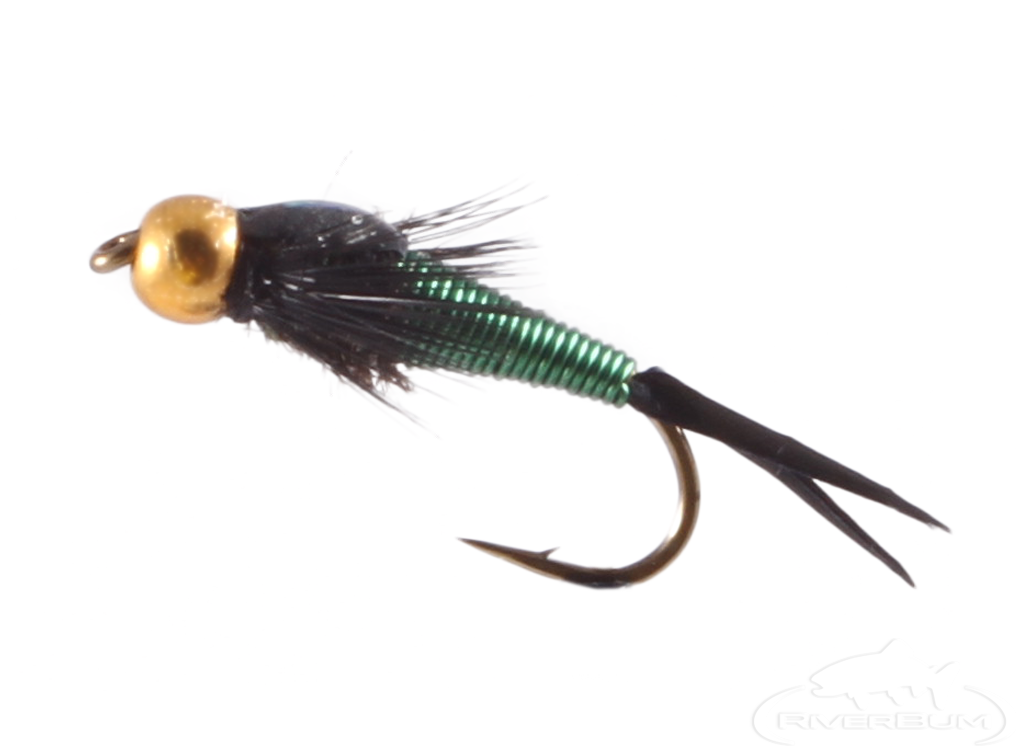 The Green Copper John Bead Head Nymph Fly is a popular and effective pattern has taken the fly fishing world by storm. This fly sinks quickly and can be used as a deep nymph or a dropper. Fish seem unable to resist the combination of color, flash, and realistic shape. it is best fished where mayflies or stoneflies are common and even works in certain lake situations. 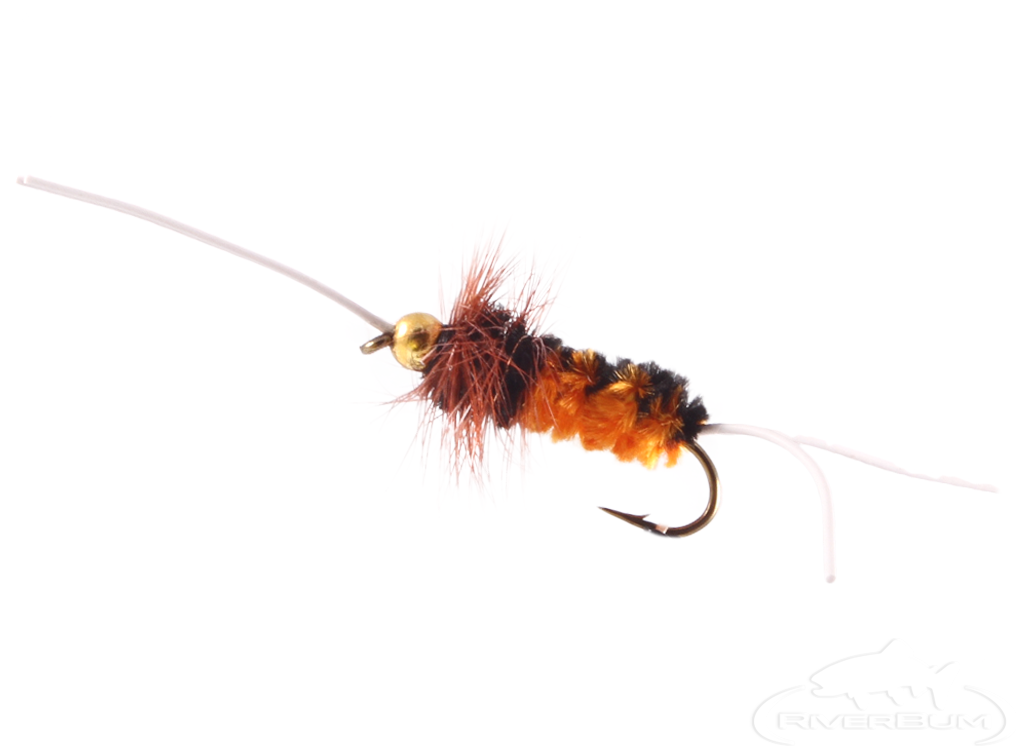 The Bead Head Bitch Creek Nymph Fly is a newer version of a famous pattern. The contrasting colors and the motion of the rubber legs give this fly attracting qualities fish can't pass up. Flash from the bead will trigger strikes and the extra weight it provides will help you get this fly down in big water. These features make this one of best producing fly patterns when fishing in high or off colored water. Bitch Creek Nymphs will work almost anywhere but are most effective in waters with stoneflies or crayfish. 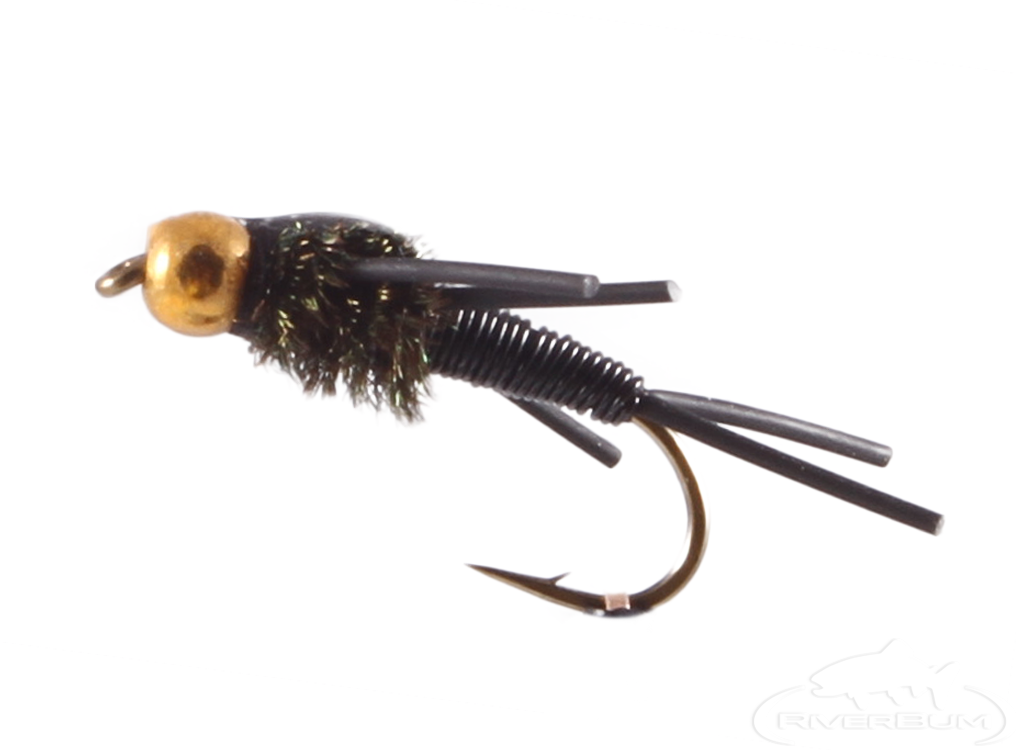 The Black Body/Black Rubber Legged Copper John is a super effective pattern that has taken the fly fishing world by storm. This fly sinks quickly and is a great choice for deep nymphing or for a dropper off of your favorite attractor dry fly. Fish seem unable to resist the combination of color, flash, and realistic shape this fly offers. The addition of rubber legs creates added movement which makes this fly hugely successful. Most guides and serious anglers never enter the river without having several variations of this productive pattern. 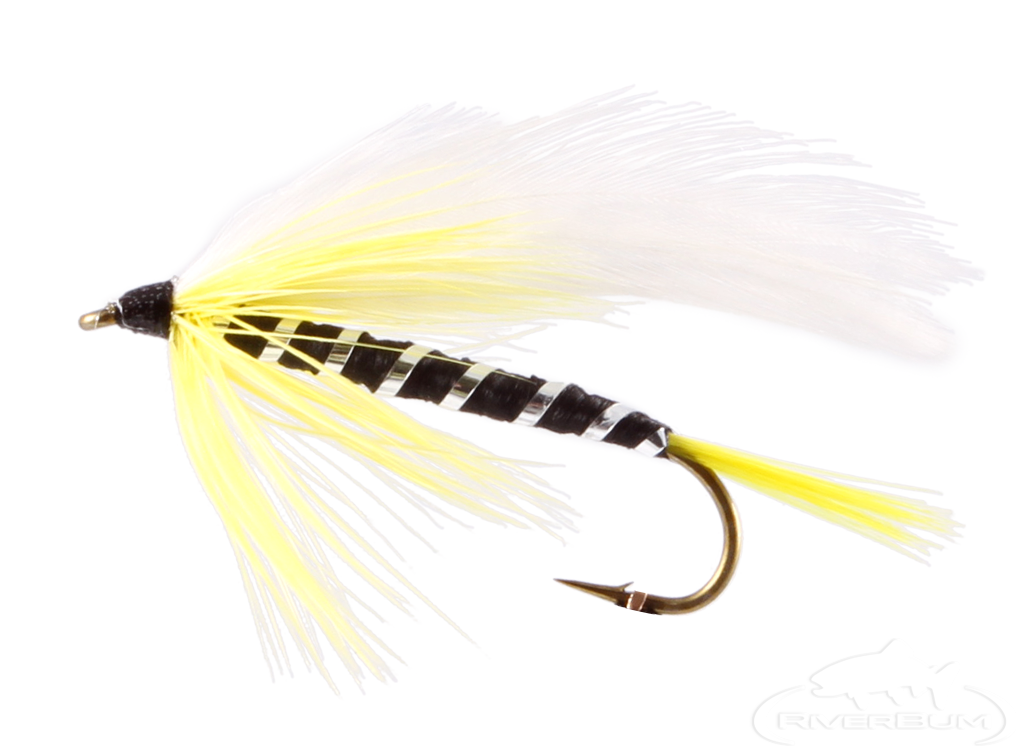 The Black Ghost Fly is an adaptation of a traditional streamer pattern. It is useful on salmon, steelhead, and other sea or lake run trout. 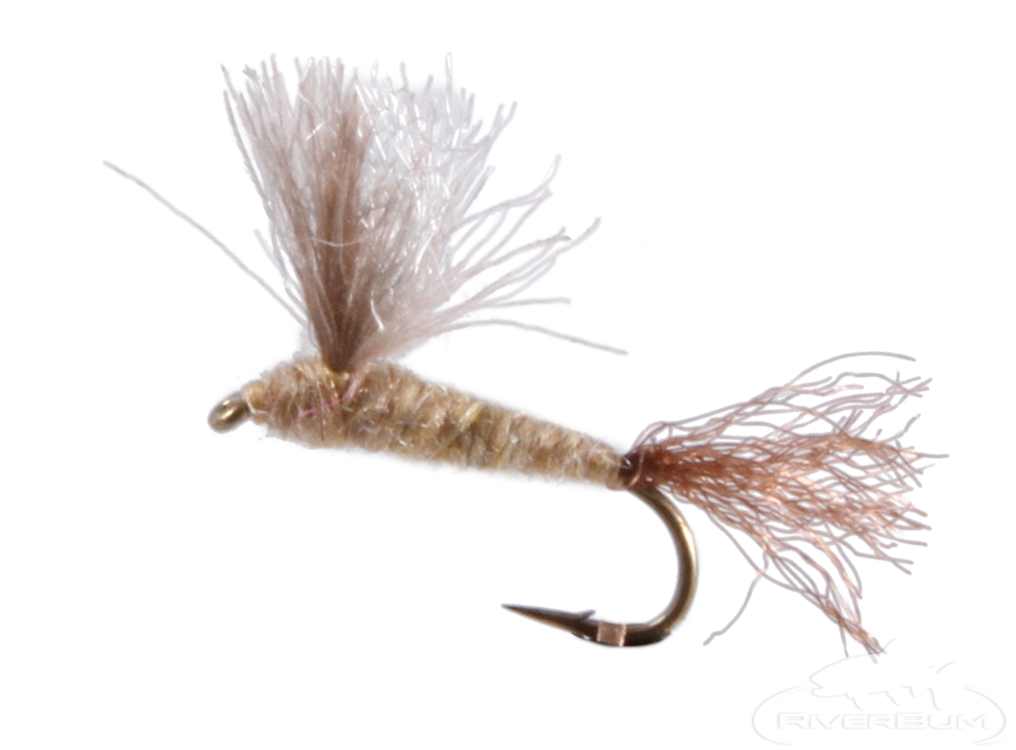 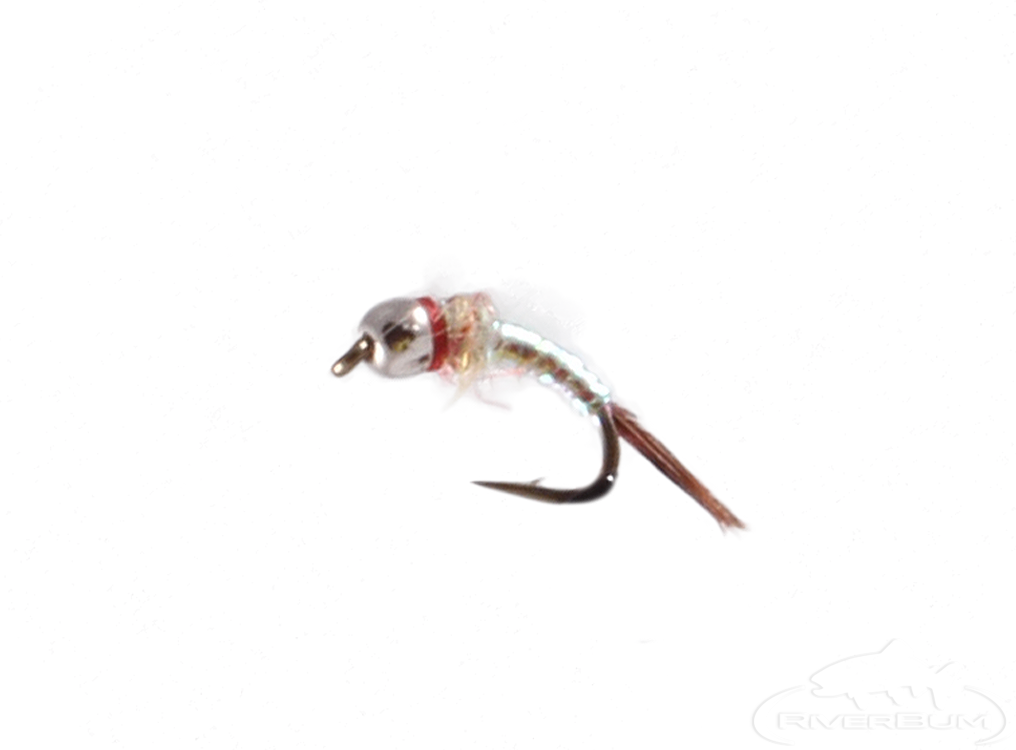 The Pearl Rainbow Warrior Tungsten Bead has become a top selling fly in our retail location and we are proud to offer it here. The thorax of this fly is rainbow dubbing which is a blend of different colors. We feel some of the reasons this fly is so productive is at least one of the colors will stand out in any fishing condition and the abdomen closely matches a midge pupa. The Rainbow Warrior works in almost any water but is hard to beat when fish are feeding on midges. This pattern works well in waters with sow bugs and will also work for a Mysis shrimp. The extra weight of the tungsten head makes this fly sink fast and makes this fly a great choice to trail off of a dry. 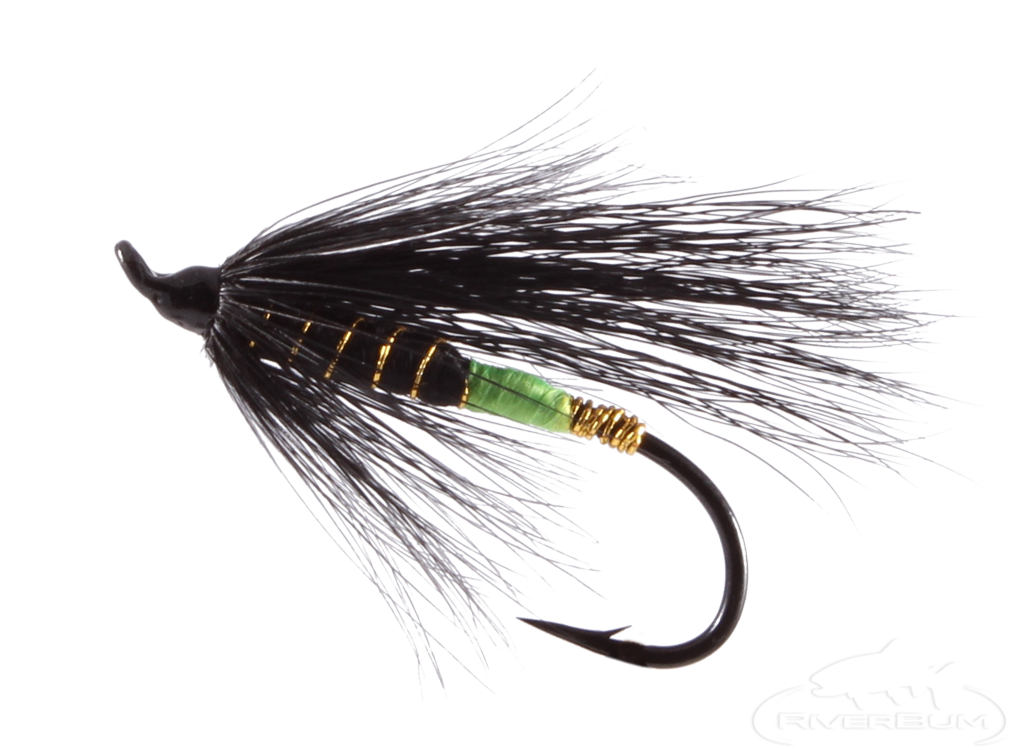 The Green Butt Black Bear Fly is an effective and attractive traditional steelhead and salmon pattern. It is useful wherever fish chase darker swinging patterns. 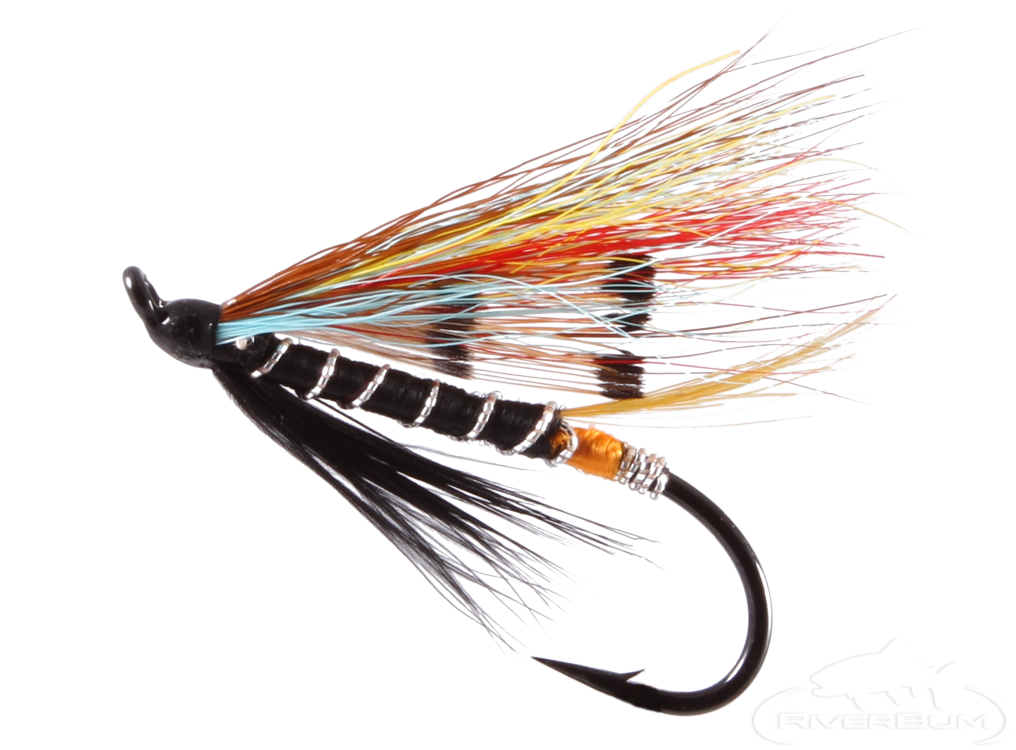 The Black Dose Fly is an attractive pattern that combines a flash of color with a visible dark profile. Although a classic Atlantic salmon pattern it can be effective on multiple species.